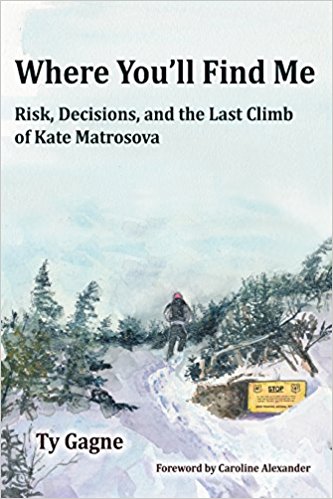 Last week I caught a program on NHPR’s Exchange centered on this high profile 2015 White Mountain climber fatality. My connection to this story started with a Mountain Rescue Service call-out on the late afternoon of February 15th, 2015 when I was driving home from teaching an AIARE Avalanche Course. My commitments to the on-going course would prevent me from responding to the call-out but I would follow the rescue attempt carefully over the next 48 hours and shortly after post this blog post about the outcome and my initial thoughts.

This tragedy would go on to capture the attention of the national media and local interest and has now been brought back into the limelight with the publication of this book, Where You’ll Find Me; Risk Decisions, and the Last Climb of Kate Matrosova.

I received the book from Amazon this past Monday and by Thursday I had carved out enough time to read it cover to cover. I want to dive into a bit more detail about this take on the well publicized story rather than just say this is a “must read”.

The author, Ty Gagne, points out this particular rescue attempt gathered a lot of media attention for multiple reasons. First there was the real-time media engagement of an active search and rescue attempt occurring during a well forecasted “perfect storm.” Second was the victim seemed to not fit the typical “flat-lander” stereo-type that causes some in the north country to quickly cast blame on those who end up floundering a bit in the mountains. She was equipped with high end gear and clothing and multiple electronic safety devices… so what went wrong?

In an eloquent and respectful way Ty manages to walk us through Kate’s back-ground, planning, and finally execution of what would be Kate’s last mountain adventure. Having summited a few of the tallest peaks in the world many perceived she had a lot of experience, however through careful retrospection it becomes clear that her previous mountain achievements were mostly guided ventures, allowing someone with more experience and local knowledge to make critical go/no go decisions. For all intents and purposes it appears this was her first non-guided high risk adventure…yet as Ty documents she was quite meticulous about her planning.

Much of this book however was not actually about Kate but about those who work tirelessly on search and rescue. Some are paid state employees while most are volunteers from all walks of life. Ty is able to describe multiple timelines from these heroes and their own struggles while Kate’s epic unfolds in a clear and engaging manner from start to sad finish. This re-telling from multiple perspectives is well done but he goes beyond simply just saying what happened when and to whom…

Throughout the book Ty instructs the reader on the incredibly complex topic of “risk management”. This should be easy for Ty as his career is in corporate risk management, but the way he converts high risk corporate strategy to what we do in the mountains is quite amicable. He draws upon lessons from multiple walks of life from high stakes corporate decisions to the most current recreational avalanche safety and mitigation theory. The reader is left with no choice but to think more intentionally about how they manage their own risk whether planning a solo hike in the White Mountains or a day cragging with friends, we are all left with the reminder that nature is indifferent in her response to our often very personal decisions.

Ty has done an excellent job researching and presenting this tragic event in a very respectful yet honest manner. For those who have read and enjoyed the acclaimed “Not Without Peril” this is another “must read” for your library. We can all learn something from Kate’s story and Ty’s re-telling of it is a powerful and fitting tribute to her final mountain adventure.

Sunday night while I struggled with figuring out a productive field course location for the third day of an AIARE 2 Avalanche Course Kate Matrosova, a 32 year old climber from Russia who lived in New York City as an investment banker on Wall Street, was struggling to stay alive. Her husband had dropped her off at the Appalachia Trail-head at 5:30am for her solo-attempt at a Northern Presidential Traverse; Mount Adams, Madison, Jefferson, Washington. A seemingly fitting objective for the Presidents Day Weekend.

Kate was no neophyte to mountaineering. Her Facebook page showed someone who had passion, skill, and quality gear for recreating in the mountains: 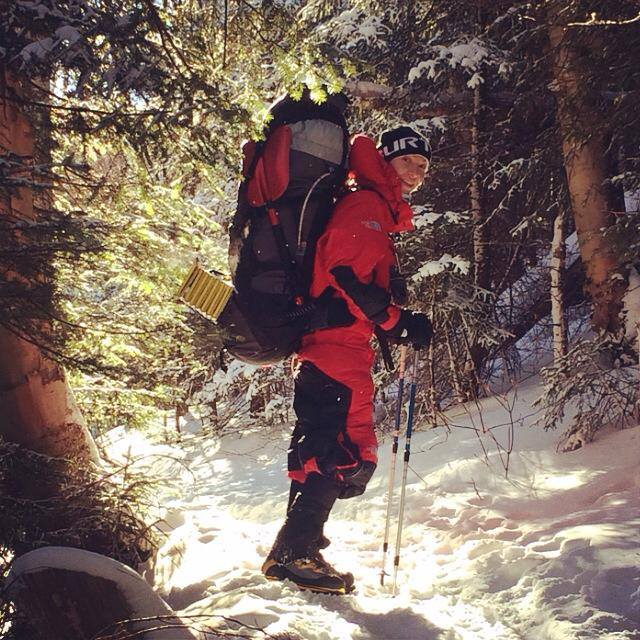 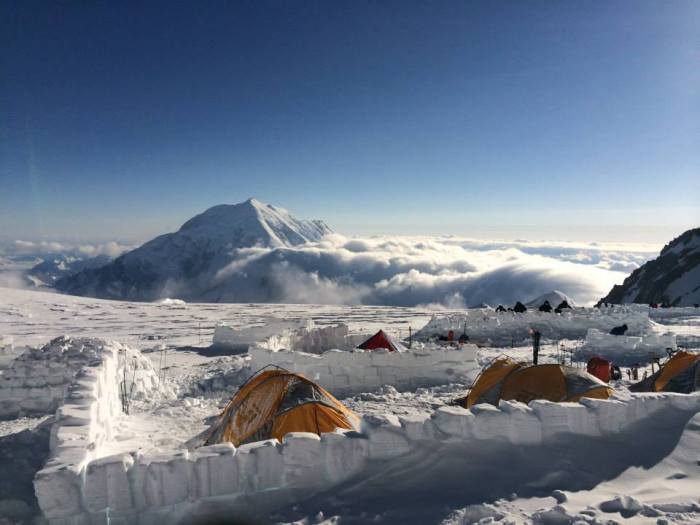 She was also quite bright. A graduate of the University of California, Berkeley, and the Haas School of Business, she must have had a solid head on her shoulders. So why did she attempt this exposed alpine traverse with this weather forecast?

In the clouds with snow and blowing snow. White out conditions. High temps dropping to -20F. Winds NE shifting NW 45-60mph rapidly increasing mid-morning to 80-100mph with gusts up to 125mph. Wind chills 65-75 below zero.

Wind speed is not as much of an issue as wind direction when attempting to go above treeline in harsh weather. I have summited Washington with clients in conditions similar to these. The difference here is careful use of terrain to “block” yourself from these debilitating winds. In this case she most likely ascended “Valley Way” and once she broke tree-line had a 80+ mph wind at her back. 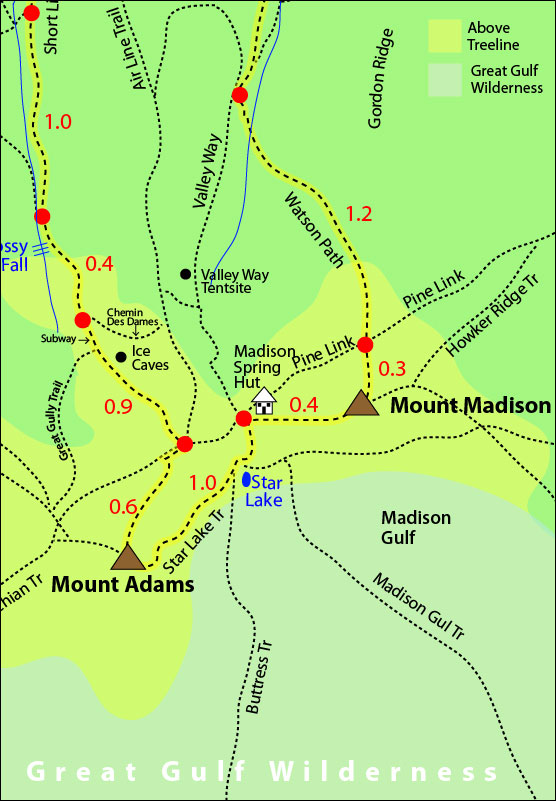 The “yellow” in this simplified map represents above-treeline. Only a few hundred yards in that direction could be hard to reverse in those conditions. Star Lake, the vicinity of which she was located, is just on the lee, or sheltered side of this alpine ridge. An escape out of the Great Gulf Wilderness, even with snowshoes, could be impossible with our current deep snow-pack. Around 3:30pm she activated a Personal Locator Beacon indicating distress, and that would be the last communication she would have with anyone.

I received the automated Mountain Rescue Service call at 4:58pm while driving home from our Crawford Notch field location. While I could not respond due to the commitments of the current avalanche course I knew fellow Mountain Rescue Service members and friends would be heading up the mountain that night. While I know they are all tough as nails I wished who ever went up would stay below tree-line, as the Sunday night forecast above treeline was one of doom.

At some point that night the rescue efforts were suspended until 8am the following morning. Fellow rescue service members took some footage of conditions the following day:

At some point Kate was located, lifeless, having succumbed to exposure. With heavy hearts, and probably cold hands, rescuers began the long process of bringing her down the mountain.

I intended to mention this tragedy within a post about the AIARE 2 Avalanche Course but this has consumed my thoughts over the last two days so this tragedy will consume this post. I’ll post up about the AIARE 2 Avalanche Course in a few days. In the mean time we need to reflect on how we live our lives. Balance of risk vrs. reward is subjective. I must tell myself Kate did not know what the weather forecast was for the day of her ambitious traverse attempt. With her experience and knowledge she should have known gaining this ridge in these conditions would be horrific.

Or maybe not. Our “little” mountain range has a long history of claiming both the seemingly ill-prepared as well as those who were quite prepared.

Did she overlook the forecast? It’s quite likely she didn’t see that day’s forecast given her departure time. Of particular note is the low Nor’ Easter that was the major weather maker during this period travelled 100 miles further southeast than anticipated.

This caused a shift in the predicted wind direction for Sunday from South shifting East on Saturday Night to East shifting North Sunday morning. If Kate was aware of the forecast from Saturday it may have been reasonable to move forward based on the expected winds coming from the East, as most of her route would have been more sheltered, but more importantly retreat back down the north side of the range would have been manageable. It is quite likely she did not have access to the updated forecast Sunday morning.

But why did she push on past the point of no return with the winds at her back? Making observations in real time should take precedence over predictions. Having a conservative plan to fall back on can help stem human factor issues that can cause us to push on when Mother Nature is doing her best to turn us around. Did summit fever play a role? Commitment? Did the Personal Locator Beacon provide a false sense of security? None of these questions are likely to be answered. But they are worth asking. 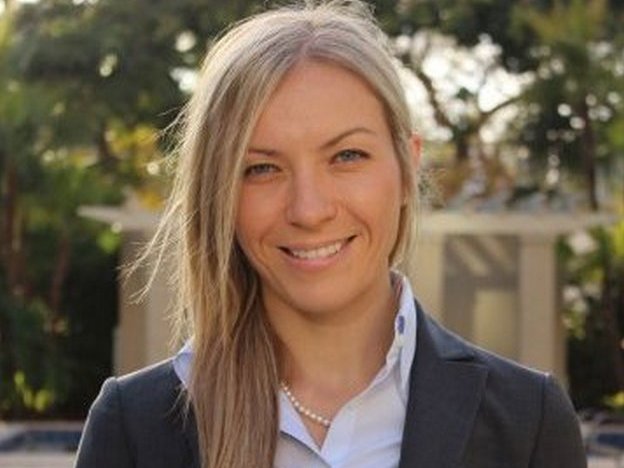 My heart & thoughts are with Kate’s husband and family this week. While you can’t really get to know someone through Facebook & LinkedIn I feel this person was full of life, and made an untimely mistake that took all. I pray we all move forward in life pursuing our passions with a reasonable degree of zest, inhibition, and due-caution, as hard as balancing all those things can be…