Last Friday, March 1st, we started another 3-Day AIARE 1 course. March 1st seems to be a dangerous day, as just 2 years ago a very experienced skiier took a huge ride in Gulf of Slides. This year a very experienced local climbing guides party triggered an avalanche while he was ski guiding in Tuckerman Ravine and a solo ice climber triggered an avalanche in Huntington Ravine that was fatal. Until I see official reports from the USFS I am with-holding talking more about these incidents but I will update links here as more info becomes available. In the meantime let’s reflect on the tragedy that has occurred; a 24 year old climber has lost his life pursuing his passion. Without a doubt lessons will be learned for this, but let none of us think we couldn’t have made the same mistakes of either party.

As usual we met at the AMC Highland Center in Crawford Notch. After introductions we took a look at the Gulf of Slides case study before breaking into small groups to learn what we could from the incident and consider a structured decision making process like AIARE’s “DMF”.

That afternoon we spent a few hours outside practicing Companion Rescue, i.e. how to efficiently rescue your partner if they are buried in an avalanche.  After some classroom the morning of Day 2 we drove over to Marshfield Station at the base of the Cog Railway to begin our Observation Outing. After a weather observation and beacon function check at the trail-head we started our ascent.

We soon noticed some interesting Surface Hoar growing on some twigs, and along the rails of the Cog and to a small extent the closest snow surfaces to the railway. 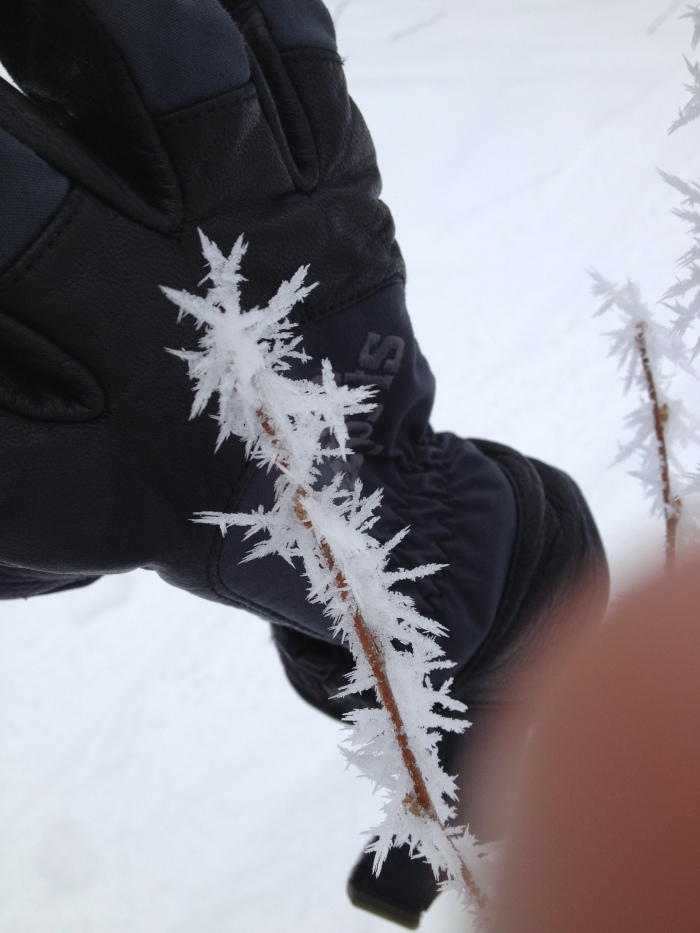 While I tried to wrap my head around why this was so prolific during considerably overcast conditions we climbed up to 3,800 feet and took another weather observation at Waumbek Tank. About 45 minutes later we arrived at our high point objective, Jacob’s Ladder, and poked around in the snow a bit looking at the layering and learning about Hand Hardness scales and Compression Tests.

It was a pretty sweet ski back down to the trail-head where we reviewed our choices and expectations and made plans for the following day on the other side of Mount Washington.

The next day we met at Pinkham Notch Visitor Center and broke into small groups again to work on a trip plan for the day. The avalanche bulletin for the day was complex, and even included the line “The avalanche conditions are paydirt for avalanche practitioners, guides, and educators.” Perfect for our goals of moving through complex avalanche terrain, making observations about snowpack, weather, and avalanches!

After reviewing our trip options created that morning and updating our weather expectations we decided we could stick to Plan “A” and set a skin track up the Little Headwall to get into the ravine.

We got some interesting Compression Test results and a eye-opening Rutshblock (RB3 MB 18cm down followed by RB4 MB 38cm down). Unfortunately we didn’t film it. After wrapping up our observations we dropped the Little Headwall and enjoyed the packed powder run down the Sherbie… back at PNVC we debriefed the day and the course in general. My esoteric field notes from the day;

Well, only 4 weekends left to the avalanche course season, two are sold out. Winter is not leaving as fast as it did last year. Safe “Spring Skiing” conditions were already here this time last year, but are weeks away looking at the long range forecast. Read the bulletin. If you are unsure, scale back your ambition, and come back when conditions match your confidence and understanding!

See you on the mountain!